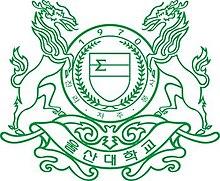 The University of Ulsan (Hangul: 울산대학교) (UOU) was founded on February 19, 1969 as the Ulsan Institute of Technology. The University was promoted to a full-fledged University on March 1, 1985. The university is located in Mugeo-dong, Ulsan, South Korea.

The city of Ulsan has been recognized as the Korean city which was built around the corporate base of the multinational Hyundai conglomerate. Thus, the Hyundai Conglomerate announced its plan to give 40 billion won to assist a variety of university-industry cooperation projects. This corporate relationship has helped turn the University into one of South Korea's top rated institutions for graduate job placement, as well as increasing its reputation more broadly as one of the top private universities outside of Seoul.