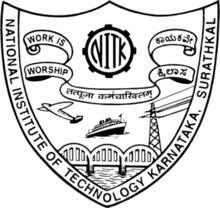 National Institute of Technology Karnataka (NITK), formerly known as Karnataka Regional Engineering College (KREC), also known as NITK Surathkal, is a public engineering university at Surathkal, Mangalore. It was founded in 1960 as KREC while today, it is one of the 31 National Institutes of Technology in India and is recognised as an Institute of National Importance by the Government of India. It has a suburban campus, in close proximity to the Arabian Sea. National Highway 66 runs through the campus and serves as the major mode of access.