A summary of the resource assessments of these energy sources was published in early 2021 in “Marine Energy in the United States: An Overview of Opportunities.” The charts and tables below provide high-level overviews of the results presented in the summary. 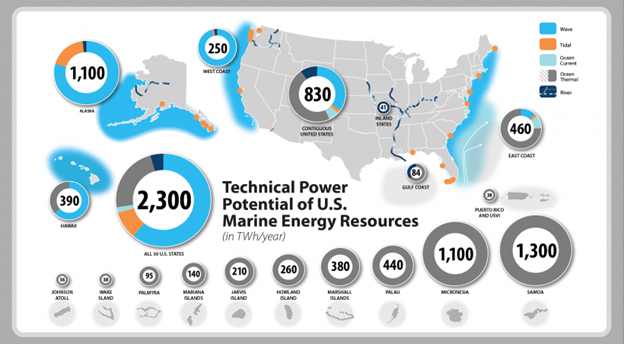 This map shows the relative proportions of resources in the different regions of the United States and their total output in terawatt-hours (TWh) per year as compared to several island systems around the world. Image from John Frenzl, NREL.

There are three levels of resource assessments:

The following table is a reference for the theoretical and technical levels of U.S. marine energy resource potentials in terawatt-hours per year (TWh/yr).

WPTO is committed to identifying resource potential and continuing to refine these characterizations and adaptations of resource assessments to benefit large-scale commercial or blue economy applications as renewable marine energy technologies are further developed.

The goal of the project is to refine, extend, and disseminate the data necessary for marine energy device engineering and project planning. The project is organized around five primary activity areas: wave modelling and analysis, tidal current modelling and analysis, resource characterization and classification, resource measurement, and data dissemination. PNNL leads the modelling efforts, Sandia leads characterization and classification work, and NREL serves as the lead for resource measurements, data dissemination, and the overall project coordination. All of these activities are conducted with careful attention to best practices and methods recommended by the International Electrotechnical Commission's (IEC) Technical Committee 114. The project also has several public and private partners and holds quarterly calls with a steering committee of international experts and U.S. industry representatives to solicit guidance on key project decisions.

The data and tools generated by this project are used by technology developers for device design and by project developers for optimal siting, array design, and economic assessment. The data is also critical to convey the value of marine energy to the public, offer energy assessments (power supply and energy portfolio diversification) to regional planners and policy makers, share operational reliability and economic assessments with utilities workers and investors, and provide environmental impacts studies to regulatory agencies.