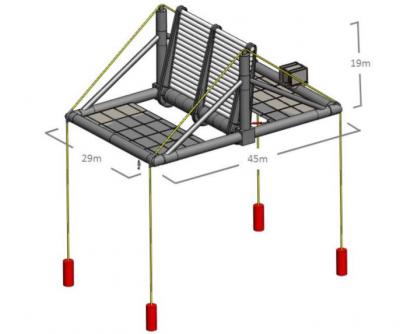 The Reference Model Project was a partnered effort to develop open-source marine hydrokinetic (MHK) point designs as reference models to benchmark MHK technology performance and costs, and an open-source methodology for design and analysis of MHK technologies, including models for estimating their capital costs, operational costs, and levelized costs of energy.

Reference Model 5 (RM5) is a type of floating, oscillating surge wave energy converter (OSWEC) that utilizes the surge motion of waves to generate electrical power. The reference wave energy resource for RM5 was measurement data from a National Data Buoy Center (NDBC) buoy near Eureka, in Humboldt County, California. The flap was designed to rotate against the supporting frame to convert wave energy into electrical power from the relative rotational motion induced by incoming waves. The RM5 design is rated at 360 kilowatts (kW), uses a flap of 25 m in width and 19 m in height (16 m in draft), and the distance from the top of the water surface piercing flap to the mean water surface (freeboard) is 1.5 m. The flap is connected to a shaft with a 3-m diameter that rotates against the supporting frame. The supporting frame is assumed to have an outer diameter of 2 m, and the total length of the device structure is 45 m. The RM5 OSWEC was designed for deep-water deployment, at depths between 50 m and 100 m, and was tension-moored to the seabed.

The RM5 surge flap design utilizes steel and fiberglass to reduce costs, both capital and maintenance, while maintaining a desirable safety factor, as discussed further below. The flap structure is comprised of three steel upright sections with tapered profiles. The upright structures are attached to an additional steel shaft with a diameter of 3 m. The shaft is attached to the pivot point on the RM5 frame.

The RM5 frame consists primarily of 2-m-diameter rolled steel tubing. The frame is designed to allow for a pivot location for a single flap, mounting locations for mooring, and to minimize movement of the frame relative to the seabed. The footprint is approximately 45 m by 28 m.

The PCC was designed as a fully enclosed unit that can be lifted out of place for complete device replacement or overhaul; however, the hydraulic rams are separate and would be disconnected prior to PCC removal.

A taut mooring design was used to reduce the motion of the frame and improve the RM5 OSWEC design’s power performance. The design consists of four taut moorings.

This table lists documents associated with the RM5: Oscillating Surge Flap project, including reports written by the project team, links to relevant data or modeling codes, and papers that have used the project outputs or are closely associated with them. To find additional datasets and documents that look at the environmental perspective of this work, explore the RM5: Oscillating Surge Flap page on PRIMRE.