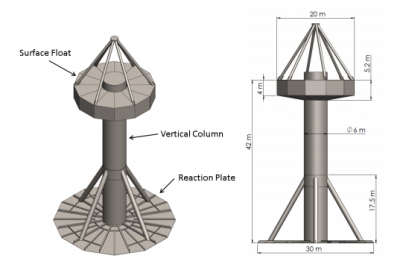 The Reference Model Project was a partnered effort to develop open-source marine hydrokinetic (MHK) point designs as reference models to benchmark MHK technology performance and costs, and an open-source methodology for design and analysis of MHK technologies, including models for estimating their capital costs, operational costs, and levelized costs of energy.

Reference Model 3 (RM3) is a wave point absorber, also referred to as a wave power buoy, that was designed for a reference site located off the shore of Eureka in Humboldt County, California. The design of the device consists of a surface float that translates (oscillates) with wave motion relative to a vertical column spar buoy, which connects to a subsurface reaction plate. This two-body point absorber converts wave energy into electrical power predominately from the device’s heave oscillation induced by incident waves; the float is designed to oscillate up and down the vertical shaft up to 4 m. The bottom of the reaction plate is about 35 m below the water surface. The device is targeted for deployment in water depths of 40 m to 100 m. The point absorber is also connected to a mooring system to keep the floating device in position.

Inside each float section are both horizontal and vertical stiffeners, which strengthen and limit deflection of the float body during operation. Bottom-side float plates required thicker steel due to operational loading (pressure forces on the underside of the float) while the top and side plates have reduced thickness to minimize the total design weight.

The vertical column (stiffener) was designed as a single rolled and welded pipe. An internal diaphragm plate separates the ballasting tank on the bottom of the column from rest of the column. Internal plate stiffeners support the diaphragm plate as well as the upper and bottom of the column.The plate has 24 radial T-stiffeners to limit the deflection of the 1 inch plate during operation. A tubular structure joins to the vertical column to transfer loads between the heaving surface float and the reaction plate.

The hydraulic circuit consists of a primary hydraulic ram that converts the relative movement between the wave energy absorber device and the central column to hydraulic pressure. The hydraulic pressure is then converted into mechanical rotation using a fixed displacement motor/pump. The motor/pump in turn drives the generator. A frequency converter, step-up transformer, and associated switch-gear are then used to convert the electricity produced by the generator into an output that can be fed into the electric grid.